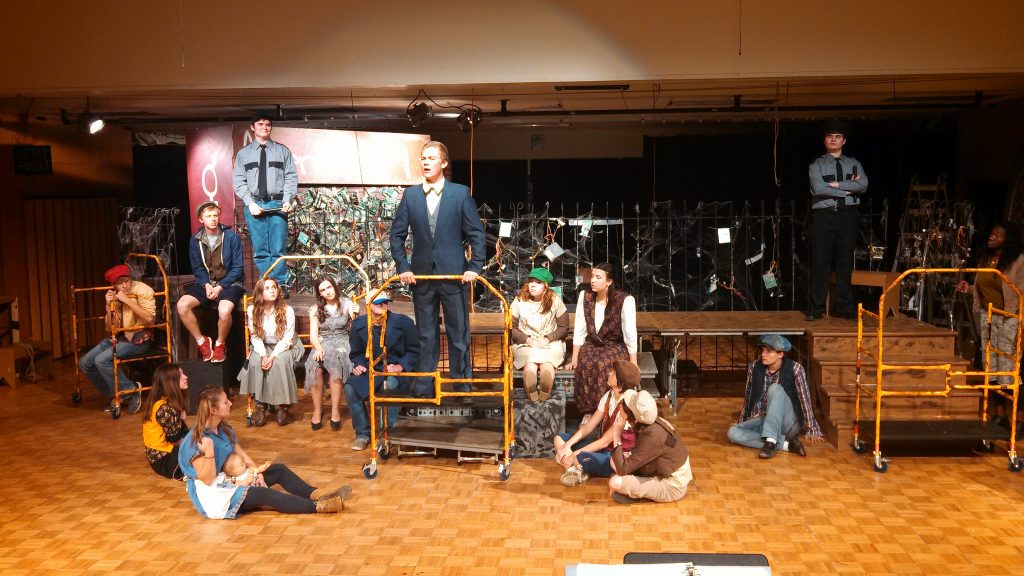 Theater has always been an important part of the Hermantown High School student experience. “There has been a Drama Club at Hermantown since the school was formed in 1942,” said Musical Director Ken Ahlberg. He would know: For nearly half that time, Ahlberg himself has been part of Hermantown’s performing tradition; first as a student in the 1980s, then as a teacher, starting in 1994. Today, with nearly 700 9-12K students, Ahlberg estimates that 100 of those are involved in the Drama Club each year, which currently puts on one full musical, one dramatic production, and a competitive one act each year. “We have recently tried an evening of student-directed one acts,” said Ahlberg, “hoping to have the plays include student-written plays.” (There is a special focus on one-act plays because, since 1970, Hermantown has participated in the statewide one-act play competition that’s overseen by the Minnesota State High School League.) 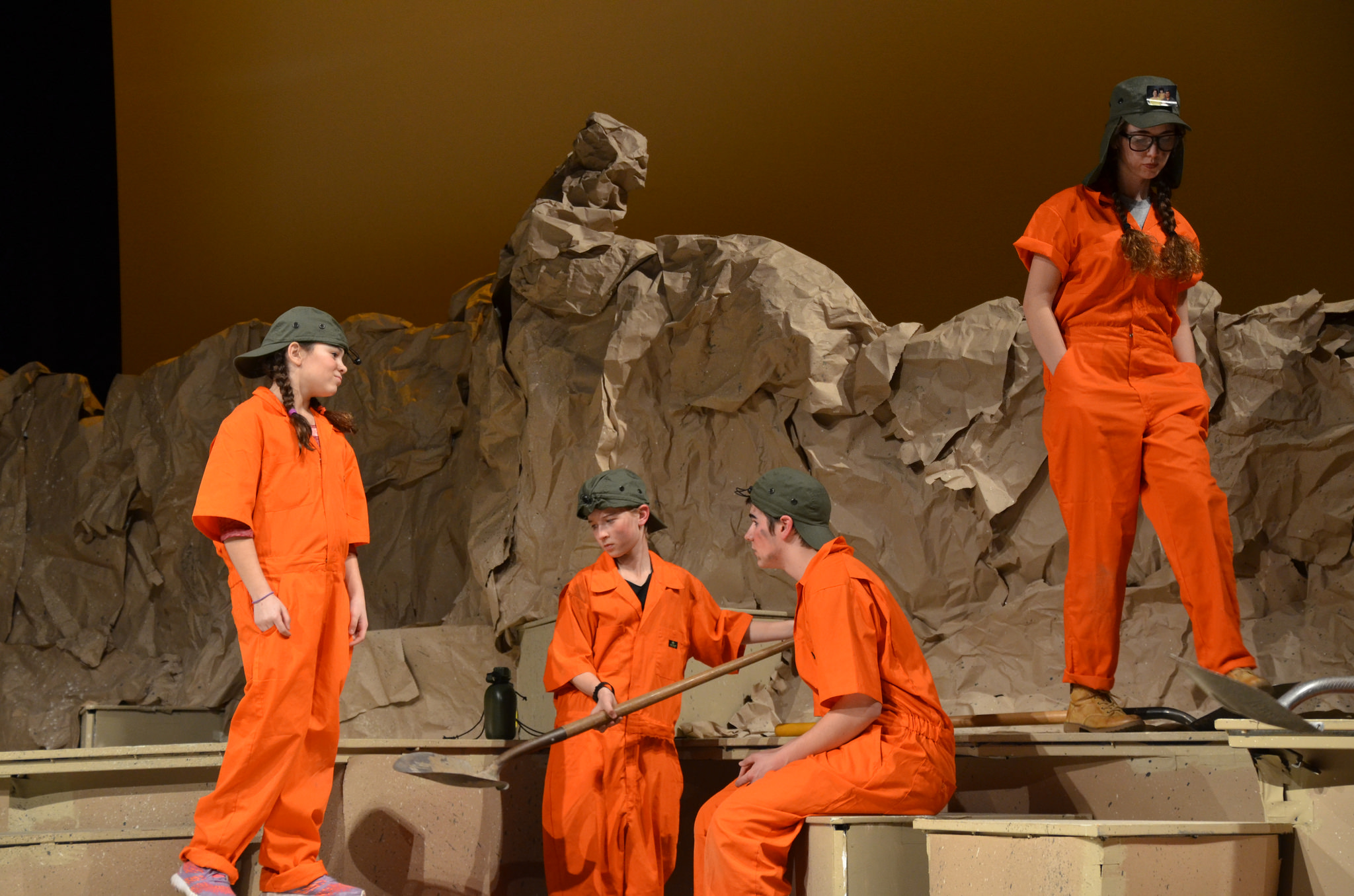 Considering that Hermantown lists 30 extracurricular activities (from Alpine Skiing to Wrestling), having one in seven students involved in theater is impressive. Flexibility is key to student participation, said Ahlberg. “The percentage of our actors and crew who are also varsity athletes is very high. I think the biggest reason we are able to get nearly 20% participation is that we welcome all students to audition, then work our rehearsal schedule around the students’ activities. It makes it a bit challenging to come up with a rehearsal calendar, but it allows all students to try out, even if they are in other activities.”

Some of the students are versatile talents and have demonstrated presence of mind under pressure: “We have had some goofy events where smoke detectors set off the fire alarms during You Can’t Take It With You,” remembered Ahlberg, “but my absolute favorite moment was during The Drowsy Chaperone, during the Man in the Chair’s monologue where he complains about cell phones in the theater. During this one performance, a patron’s cell phone began ringing! Our Man in the Chair improvised a few lines that couldn’t have been planned. Robert Martin would have loved it, I’m sure.” 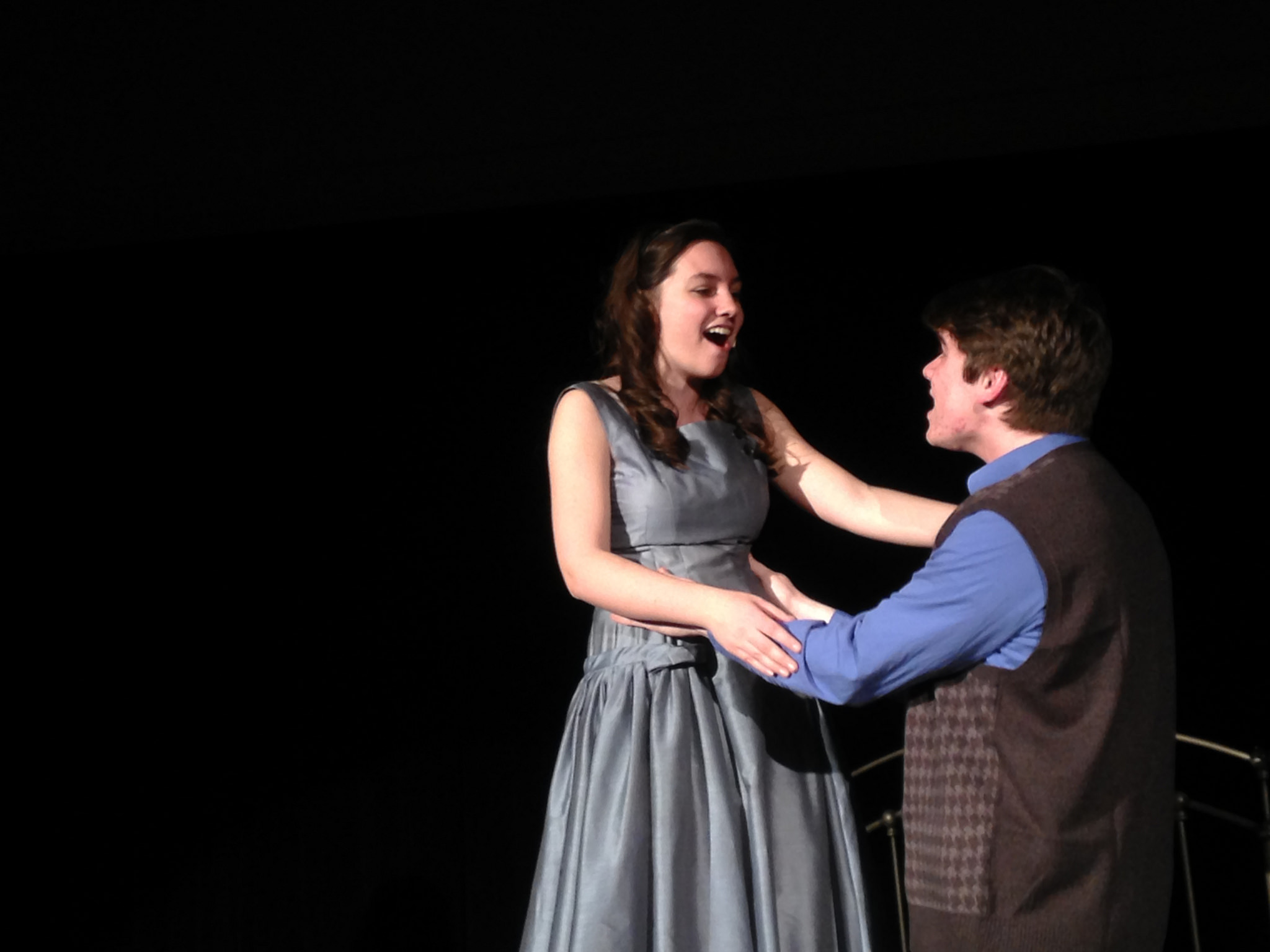 Since 1999, Ahlberg has been directing the school’s musicals – with the occasional non-musical thrown in. “I have always wanted to direct a Sondheim show, and this fall we are producing Into the Woods, so I am very excited!” Some previous personal favorites include The Light in the Piazza, Les Miserables, The Drowsy Chaperone, Urinetown, Pippin, Little Women, Guys and Dolls and Man of La Mancha.

And, for a school that does not offer a theater curriculum, a surprising number of its alumni go on to work in theater. In fact, there is a student who is currently doing online school because he is also “doing eight shows a week in Newsies at the Chanhassen Dinner Theatre, along with an HHS alumnus,” said Ahlberg. 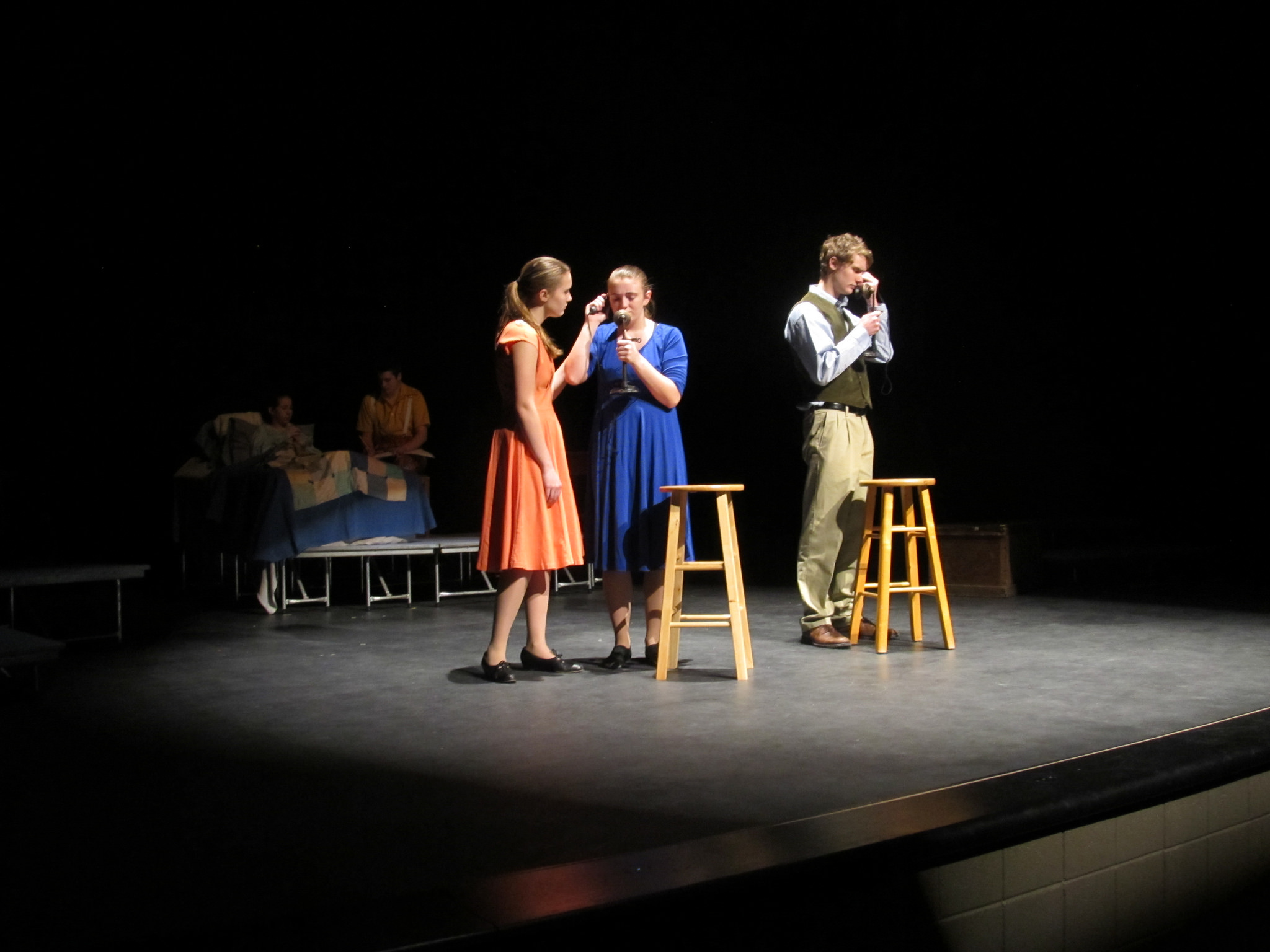 “We have a surprisingly large number of students who become theater majors, and make their career on and about the stage,” he added. “We have an alumnus who is now a costume designer in New York City, who had the great fun of dressing Chita Rivera in The Visit. Another alumnus is touring in the band with the performing artist M. Ward. We have several working actors and instrumentalists all around the country. We are extremely proud of our Equity actor Shad Olsen!” Ahlberg noted that Olsen was in his 7th-grade choir when he started teaching.

But for Ahlberg, theater was always an easy choice. “I have always been involved with plays,” said Ahlberg, admitting that “my dad made a stage in our basement, complete with curtain, where my next-door neighbor and I put on plays that our families would have to come and watch.” In college, however, Ahlberg discovered the joy of directing. “I have been onstage as an actor a number of times over the past several years, but I find I enjoy directing the most.” 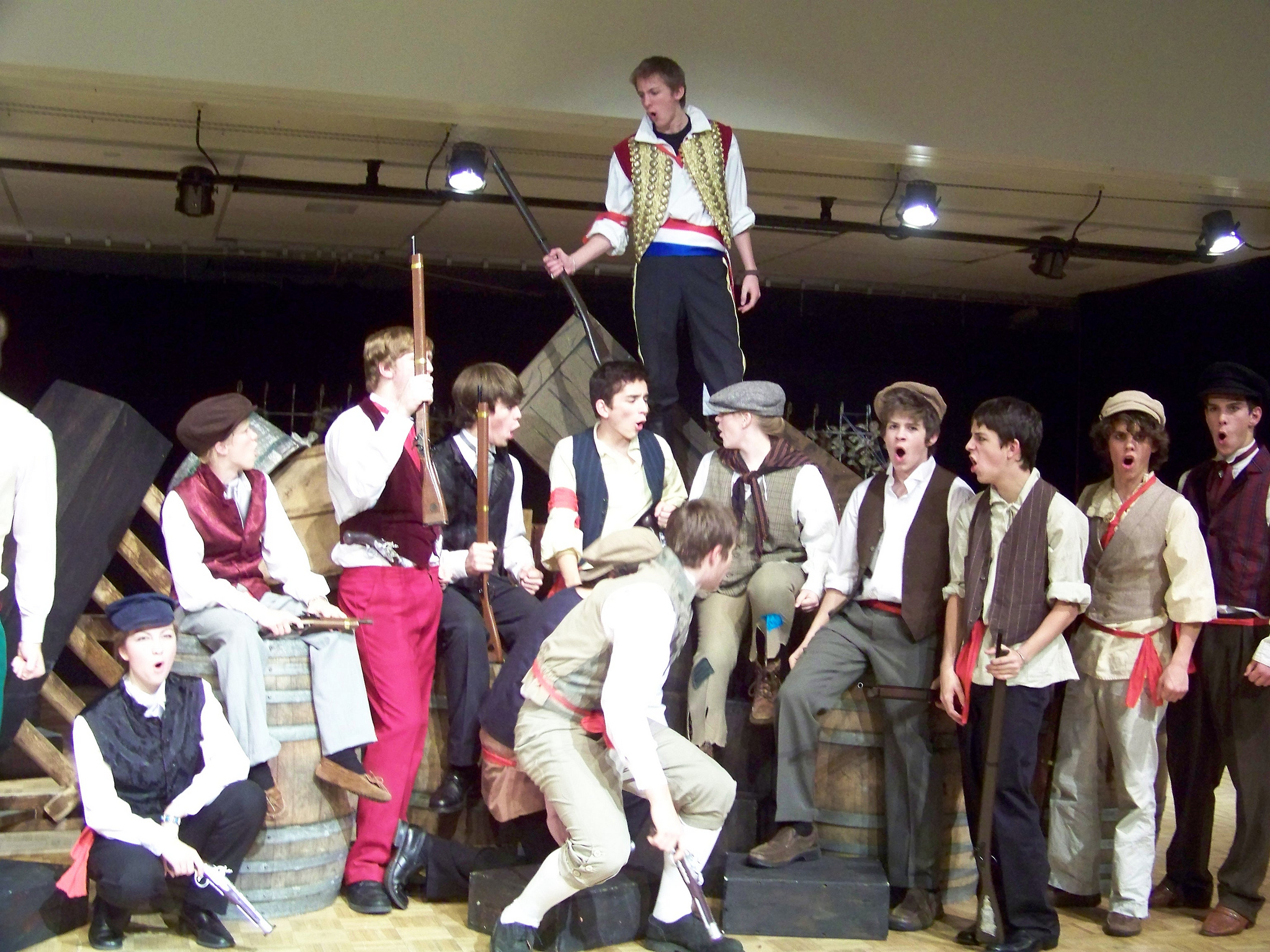 Recently, Hermantown High School moved to a new building. “This is our second year in our brand-new high school,” noted Ahlberg, “and I have to say that we might just have the best theater space in the area. We were blessed to have had our lead architect in the project have his bachelor’s degree in technical theater. Previously,” he recalled, “our performance space was a 200-seat lecture hall with the upstage being a foldable “wall” that opened to the cafeteria and was 10 feet from the gymnasium. No fly, no wings, no pit, no catwalks, no green room, no scene shop, no dressing rooms. Yet, we put on amazing shows!

“Happily, we now have a 680-seat theater with a full fly, catwalks, a space for the ‘pit,’ a green room/scene shop with a 15-foot-high loading bay door from the outside, dressing rooms, costume storage and state-of-the-art sound and lighting. Our dream is now for increased financing, so we can fully utilize the space the community has so graciously provided. We now have space where we can stage Mary Poppins with full flying effects, if we could only afford to do so.” 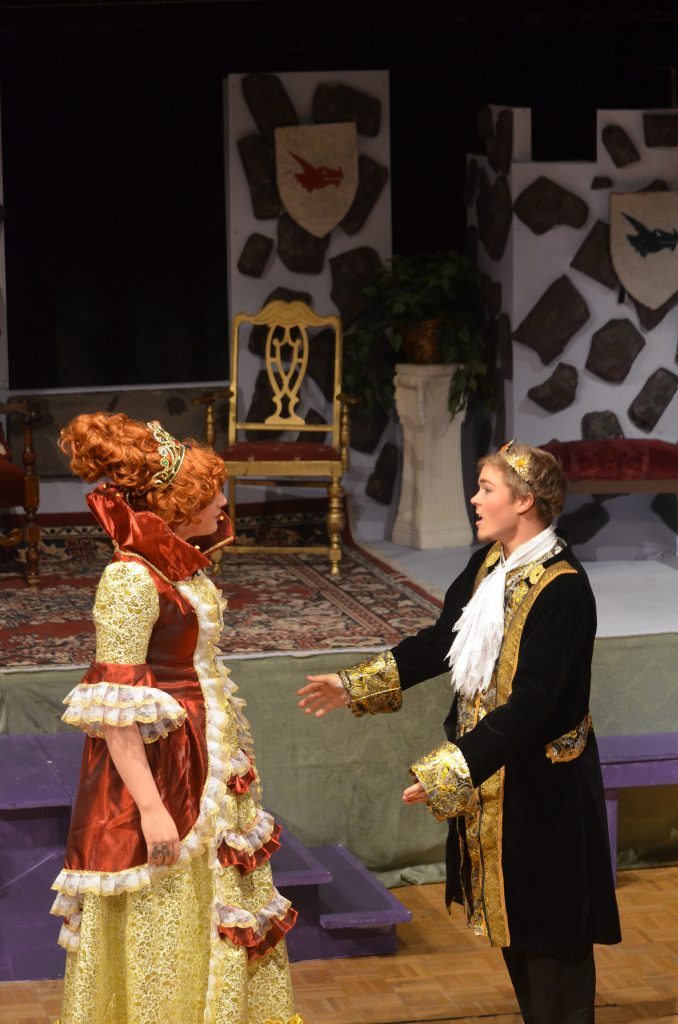 When it comes to his students, however, Ahlberg wishes that “all of our Drama Club kids find a place where they are welcome, where they can ‘try on’ being someone totally new. And perhaps find out something new about themselves, and that they have experiences that they can take with them in whatever walk of life they end up taking – whether it is in the arts or not.”

Interested in seeing Hermantown’s production of Into the Woods? Visit their Ludus ticketing portal at hhstheatre.ludus.com to purchase tickets! 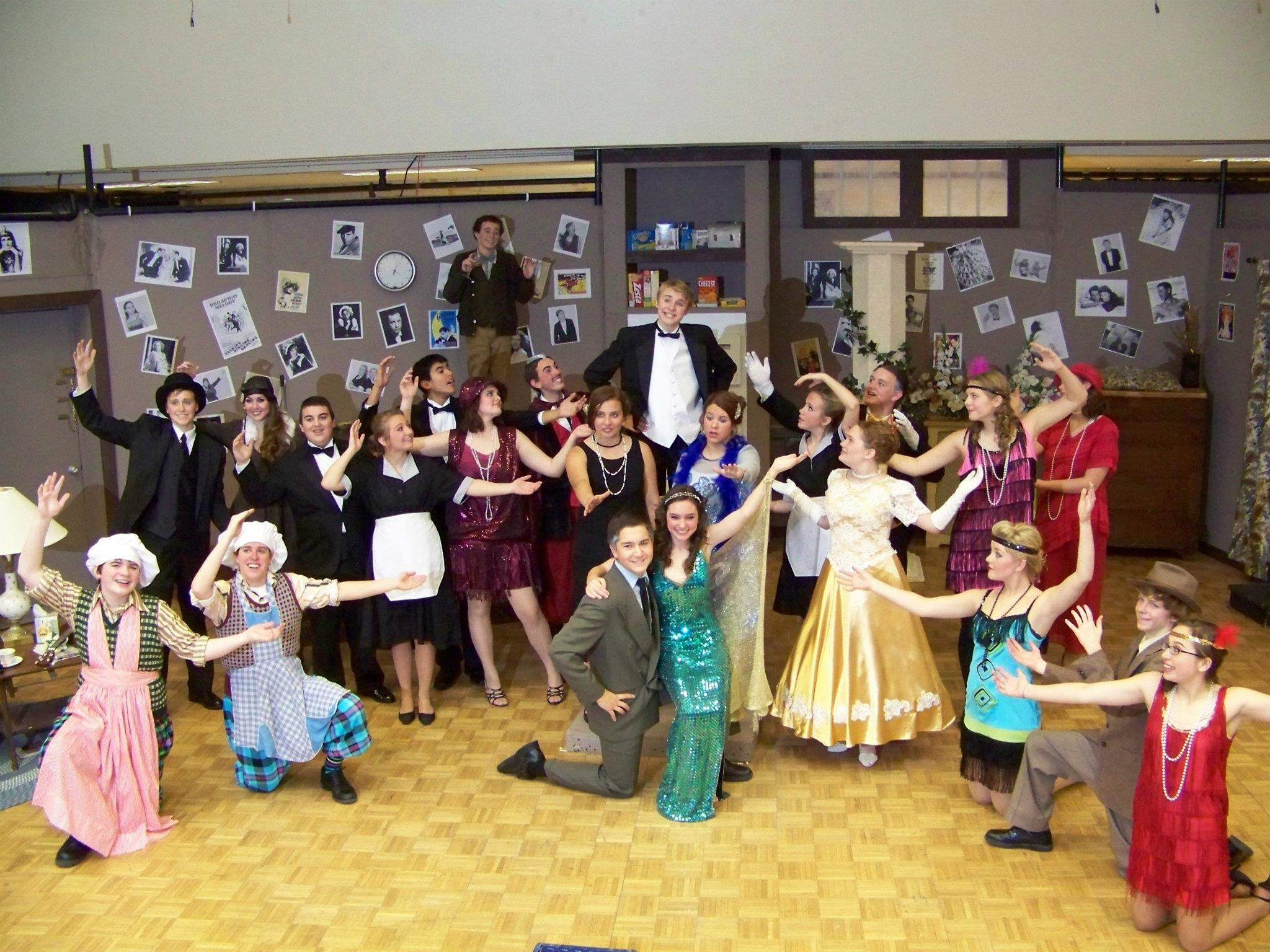