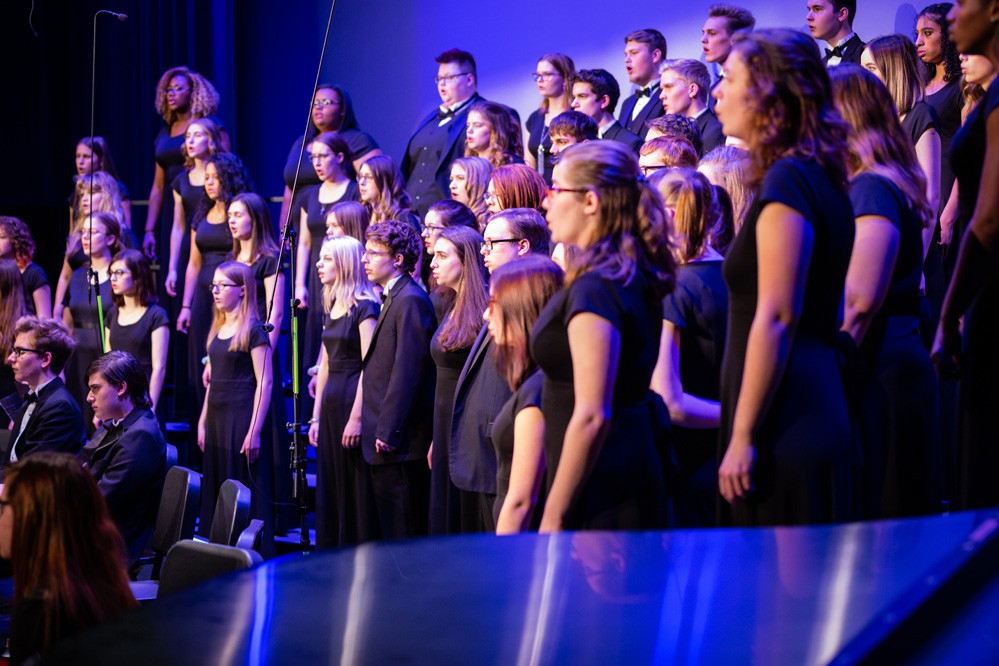 Every performer dreams of a state-of-the-art space that helps them achieve their best.

But how many have stepped onto a stage that has served generations of artists, who felt their hopes and dreams rising with the curtain? Or had teachers who encouraged not only talent but the potential for talent? Or had peers who were there to lift them up?

Even so, Tunnicliff sees a lot of use. “The Auditorium is used by the entire district,” said Clemens. “It is used by the High and Middle School Theatre and Music programs, Elementary School music programs, spelling bees, talent shows, assemblies and district meetings. When not accommodating school functions, Tunnicliff has been rented to special events, dance studios and even some bodybuilding shows. (The latter are national qualifiers and sanctioned by the National Physique Committee.) “The Flushing Concert in the Park series uses our space as a rain location during the summer,” said Clemens, adding. “We even brought in a show from a neighboring district when they were forced from their space at the last minute.”

In addition to this busy schedule, Tunnicliff Auditorium is the home of the annual Holiday Collage Concert that originated when Mike Hamilton, Clemens’ predecessor was the auditorium manager, and is put on by the high school music department for the Flushing Community. In fact, the first Collage concert was performed in 2000-2001 school year, “right after the auditorium was opened. This upcoming school year 2020-2021 will see our 20th annual Holiday Collage Concert. Our annual Collage is one of the highlights of the holiday season and the biggest fundraiser for the Music program,” said Clemens. 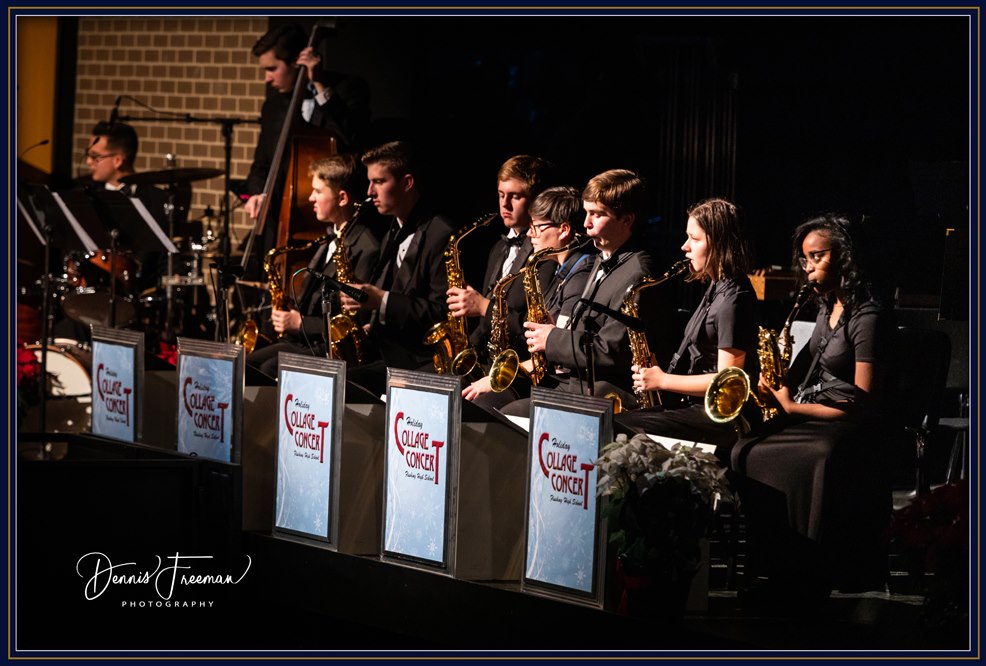 “It’s truly a special gem that we have here in Flushing,” agrees Brad Davis, Flushing’s HS/Elementary Band Director.“Our annual Holiday College is a huge community event that features the band, choir and orchestra programs and sells out four consecutive performances every year.”

The program demands great attention from Music and Theatre staff, including Davis, Eric Fontan (MS/Elementary Band Director), Nate Degner (HS/MS Choir Director), Matt Forsleff (HS/MS/Elementary Orchestra Director); and Lynda Gibson (HS & MS Musical/Theatre Director) and Stacey Daniels (HS Theatre Director). But it’s a labor of love since “our kids are some of the most talented kids we have had the chance to work with over,” said Daniels. 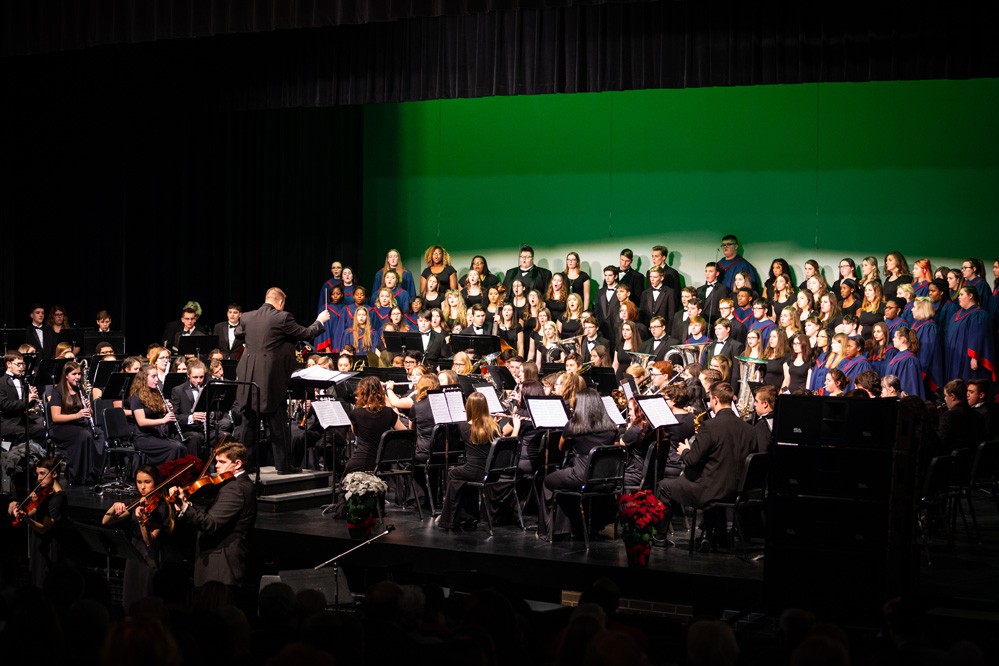 But living up to the Mike Hamilton legend is no easy task. A hands-on impresario, Hamilton was also influential in the design of Tunnicliff Auditorium. “It has a lot of the features found in more upscale and professional theatres,” noted Clemens. “The acoustics are nice, it has a catwalk and lighting design that allows for some creative effects, including LED washes.”

While the music and theatre responsibilities have been spun off her main duties, Clemens has expanded the Collage program into new disciplines. “I have tried to include more work from students outside the Music/Theatre program,” she said. “Last year, we began painting the windows for our Collage program (the work of the National Honor Art Society chapter in our school.) A student from our award-winning woodshop program made a custom table for our lobby.”

And “we began using Ludus online ticketing program for all of our high school paid events. It was recommended to our Choir director, Nate Degner, who is the mastermind and driving force behind the Collage concert. We liked that it was Michigan-based – and more user-friendly than our previous ticketing program. I like that people can purchase online, and we can opt for either passing on the fees or absorbing them (we do both depending on the show). I like that we only pay for credit card sales and when the students sell the tickets during lunch they can collect cash and email the tickets to the students. Navigating the website is easy for both administration and patrons.”

It also helps that “the customer service is exceptional. From the beginning, Zack was helpful and responsive to all of my questions and needs.” 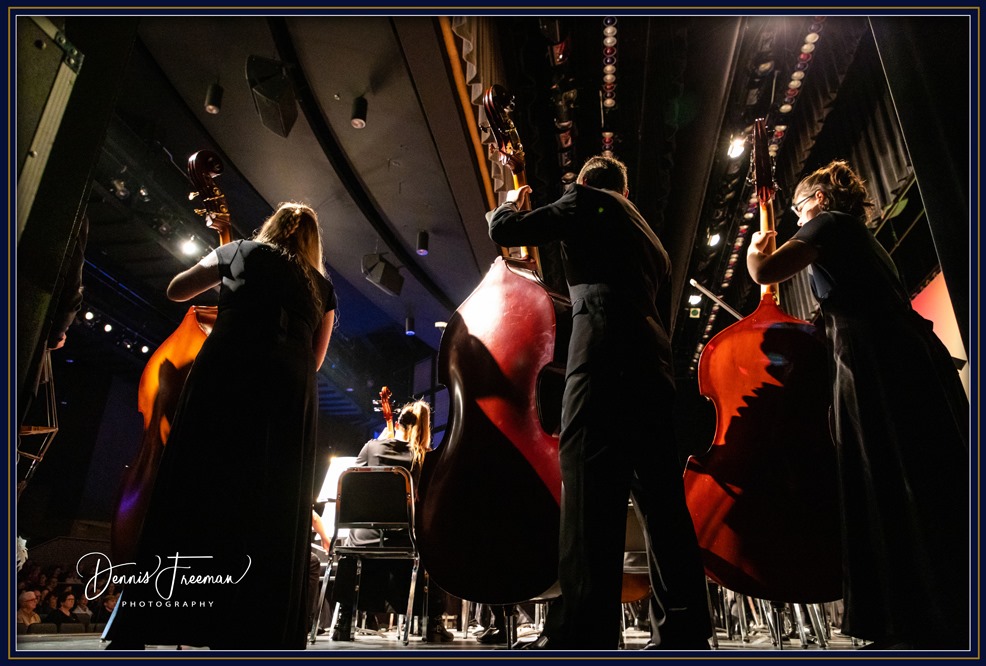 What’s next for the Tunnicliff Auditorium? “It would be nice if we could upgrade our sound system,” said Clemens. “We have already had to replace some of our wireless body pack microphones due to the Verizon purchase of wireless frequencies. The music department wants a fly-in band shell and the theatre is wishing for a short throw projector to allow digital backdrops.”

Even so, “the theatre program recently purchased goborotors!” Clemens enthused. “The students are looking forward to playing around with them during our upcoming musical, Seussical. While both our sound board and our lighting board are older they still allow us to put up professional-looking shows.”

The Seussical production is currently postponed, but for updates and other upcoming productions, visit their Ludus ticketing portal at: whtauditorium.ludus.com